The ROI of mobile applications 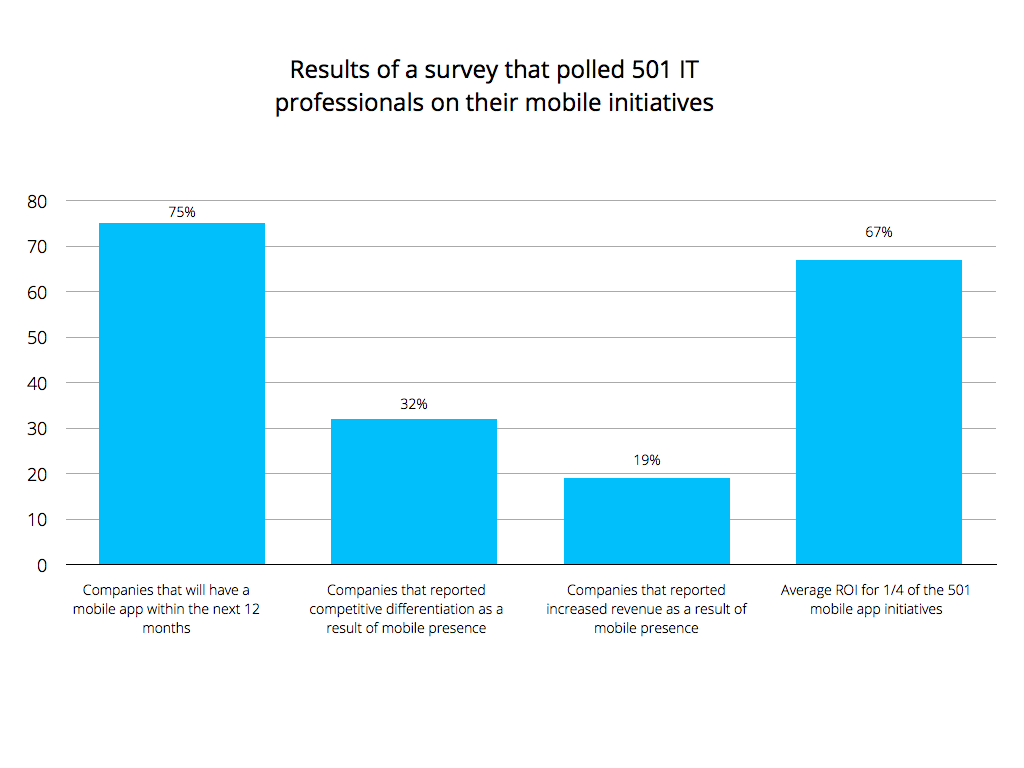 A new school of thought has emerged in advertising that may revolutionize the provocative poster-girl standard. Instead of touching people through sexual seduction, advertisers have begun to shift towards touching people through another item that is close to their consumers’ pockets, namely, their mobile devices. With US-based studies (polling 501 IT professionals) showing that 75% of companies have already deployed or will deploy mobile apps within the next 12 months in order to support their already-established channels of communication and transaction, branded apps promise to be the new sex that sells.[1] Keeping this compelling statistic in mind, let’s take a look at what the ROI is for such titillating mobile applications.

As a leader in branded mobile applications, we’ve scrutinized the analytics of our own apps in order to see what kind of direct ROI they are receiving, namely, fiscal returns. In our applications that offer a monthly-billed service, we’ve seen an average direct response rate of about 2%. That means that out of the total number of consumers who have downloaded our mobile apps, 2% of them have elected to sign up for the services that our brands offer. So if you were, say, a company that sold tea-party memberships for $15 per month, and 200,000 people downloaded your mobile app, you would have an average of 4,000 sign-ups, amounting to $720,000 in fiscal returns per year. Looking more closely at the numbers, if you were to spend $50,000 on a well-made app (in this scenario), you’d receive $14.4 in return for every dollar invested. And with regards to the monetary ROI of apps in general (not just the ones that sell monthly-billed services), 23.4% of the companies in the US-based study have reported an average of $1.67 in return for every dollar invested.[2]

Aside from direct fiscal returns, ROI from mobile applications can come in the forms of increased publicity, augmentation of an already desirable product, or savings on channels of communication that can be jettisoned due to the introduction of a mobile app. Out of the companies in the US-based study, 31.8% reported competitive differentiation and 18.9% reported increased revenue as a result of mobile presence.[3] With app download and retention rates increasing every year, companies without a mobile presence are missing out on potential sales and customer acquisitions and retentions daily.

While ROI is still a disputed topic in terms of what exactly we should be looking at when it comes to calculating the returns on mobile investments, there is no question that smartphones are the new platforms on which brands everywhere are engaging with their consumers in real time. So now that you have some food for thought, please add to the discussion and let us know what YOU know about the ROI of mobile applications. Only through collaborative discussion will we advance knowledge and achieve enlightenment.

Get in Touch! Email Us