What To Expect at the Upcoming WWDC

Between June 2nd and 6th, developers from around the world will converge on San Francisco to attend Apple’s Worldwide Developers Conference. Although rumors leading up to the conference in the past have sometimes been true, such as the unveiling of iOS 7 at WWDC 2013, many rumors did not come to fruition.

With the upcoming conference in just a few days, there have been a slew of enticing rumors about new devices and technologies that Apple may unveil, ranging from introduction of iHome to the presentation of the iPhone 6. Since Apple is remaining close-lipped, everything is speculation and we look forward to seeing which rumors are true and which rumors are not.

IPHONE 6: The iPhone 6 is one device that techies and users think will be introduced at the conference. As the iPhone 5’s screen is significantly larger than the iPhone 4, the iPhone 6’s screen is expected to grow. According to MacRumors, the iPhone 6’s retina display could potentially be anywhere between 4.7 and 5.5 inches, which would level the playing field between the size of the iPhone’s screen and that of Android devices like Samsung’s Galaxy and the Nexus. Also, there are rumors that the iPhone 6’s screen will move from Corning Gorilla Glass to sapphire crystal, which is already used in small parts of the iPhone 5 such as the camera lens. This is what the rumored iPhone 6 may look like: 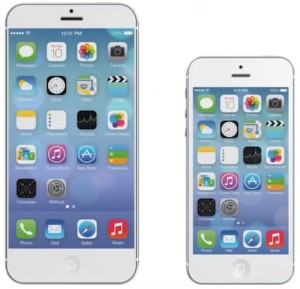 IOS 8: As iOS7 was speculated to be presented at WWDC 2013 and it was, insiders believe that iOS 8 will be introduced at WWDC14. Although the physical and aesthetic appearance of iOS 7 will not change, several new features are expected to be added, including split-screen apps, which will help users multitask, and an Apple Maps update, which will improve not only navigation by adding public transportation directions and more detailed streets, but also connectivity in an age of globalization.

IHOME: Another rumor that has been circulating leading up to WWDC 2014 is that iHome will be introduced. A smart home platform that will run on BLE and possibly NFC (near field communication), iHome would allow users to control the most basic functions of their home from the palm of their hand. This could be anything from opening the garage door when one pulls in from work to cranking up the heat in the winter to turning up the volume on the speakers at a 4th of July party.

APPLE TV: To the dismay of many hopeful onlookers, it doesn’t seem like Apple TV will be one of the keynote presentations at WWDC 2014. In fact, John Paczkowski of Re/Code claims that there will absolutely be no Apple TV at the conference.

With the conference less than a week away, these rumored technological unveilings will not only spark heated and productive dialogue, but also potentially change our lives for the better. Stay tuned for a follow-up WWDC 2014 blog post next week to see which rumors actually become reality!

Get in Touch! Email Us